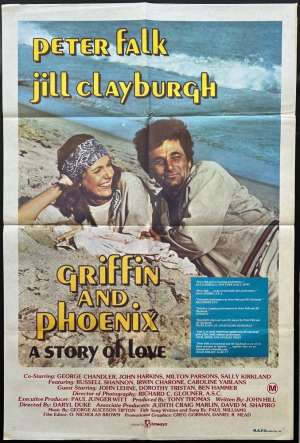 One Sheet Poster. Griffin and Phoenix (sometimes subtitled "A Love Story") is a 1976 American made-for-television romantic drama film produced by ABC Circle Films starring Peter Falk and Jill Clayburgh as title characters Geoffrey Griffin and Sarah Phoenix. Written by John Hill and directed by Daryl Duke, it first premiered on the ABC television network on February 27 1976 and was also released to theatres in select countries such as Australia. It was nominated in the category of Outstanding Achievement in Cinematography at the 28th Primetime Emmy Awards.