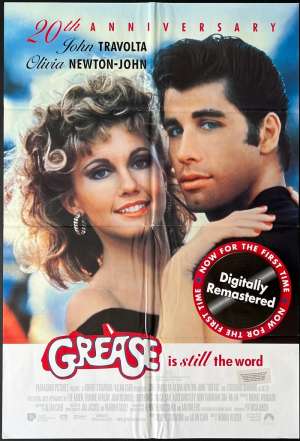 Original One Sheet Movie Poster 20th Anniversary Edition.Grease is a 1978 American musical romantic comedy film based on the 1971 musical of the same name by Jim Jacobs and Warren Casey. Written by Bronte Woodard and directed by Randal Kleiser in his theatrical feature film debut, the film depicts the lives of greaser Danny Zuko and Australian transfer student Sandy Olsson who develop an attraction for each other. The film stars John Travolta as Danny, Olivia Newton-John as Sandy, and Stockard Channing as Betty Rizzo, the leader of the Pink Ladies. Released on June 16, 1978, Grease was successful both critically and commercially, becoming the highest-grossing musical film ever at the time. Its soundtrack album ended 1978 as the second-best-selling album of the year in the United States, behind the soundtrack of the 1977 blockbuster Saturday Night Fever (which also starred Travolta)and earned an Oscar nomination for "Hopelessly Devoted to You" at the 51st Academy Awards.