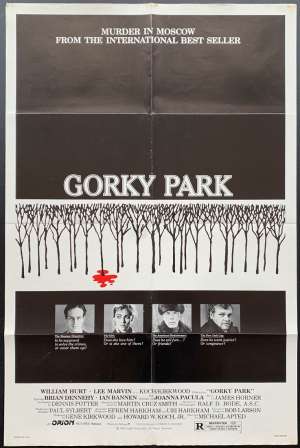 USA One Sheet Poster.Gorky Park is a 1983 American mystery thriller film based on the novel Gorky Park by Martin Cruz Smith. The film was directed by Michael Apted. The main stars of the film are William Hurt as Arkady Renko, Lee Marvin as Jack Osborne, Joanna Pacula as Irina Asanova, Rikki Fulton as Major Pribluda, Brian Dennehy as William Kirwill, Ian McDiarmid as Professor Andreev, Michael Elphick as Pasha and Ian Bannen as Prosecutor Iamskoy. James Horner wrote the score. Dustin Hoffman and Al Pacino were both considered for the role of Arkady Renko before William Hurt's casting, while Cary Grant and Burt Lancaster were considered for the role of Jack Osborne and Roman Polanski was considered for the role of Prof. Andreev. The Soviet Communist Party condemned the film as anti-Communist and anti-Russian and denied the crew access to shoot in Moscow. Critically the film was a success. Pacuła was nominated for a Golden Globe Award for Best Supporting Actress - Motion Picture and Elphick for a BAFTA Award for Best Supporting Actor. Dennis Potter won a 1984 Edgar Award for his screenplay for the film.