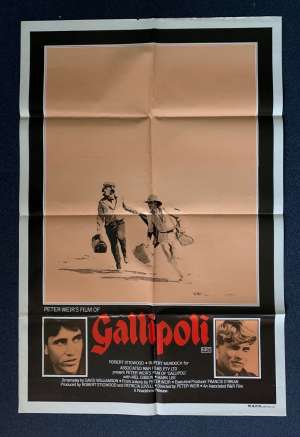 One Sheet Poster.Gallipoli is a 1981 Australian war drama film directed by Peter Weir and produced by Patricia Lovell and Robert Stigwood, starring Mel Gibson and Mark Lee, about several young men from rural Western Australia who enlist in the Australian Army during the First World War. They are sent to the peninsula of Gallipoli where they take part in the Gallipoli Campaign. During the course of the movie, the young men lose their innocence about the purpose of war. The climax of the movie occurs on the Anzac battlefield at Gallipoli and depicts the futile attack at the Battle of the Nek on 7 August 1915.Gallipoli provides a faithful portrayal of life in Australia in the 1910s. It captures the ideals and character of the Australians who joined up to fight, as well as the conditions they endured on the battlefield. Gallipoli was filmed primarily in South Australia. The cattle station scenes were shot in Beltana, the salt lake at Lake Torrens, the station at Adelaide railway station, and the coastline near Port Lincoln was transformed into the Gallipoli Peninsula. The pyramid and bazaar scenes were filmed on location in Egypt. The farewell ball scene was not in the original script but was an idea of Weir's during shooting. It cost an extra $60,000 to make. Weir cast Mel Gibson in the role of the cynical Frank Dunne, and newcomer Mark Lee was recruited to play the idealistic Archy Hamilton after participating in a photo session for the director. Gibson described the film as "Not really a war movie. That's just the backdrop. It's really the story of two young men. Gallipoli won 8 AFI (Australian Film Institute Awards) won eight AFI awards including Best Film, Best Director, Best Actor, Best Supporting Actor, Best Screenplay and Best Cinematography as well as a nomination for a Golden Globe.