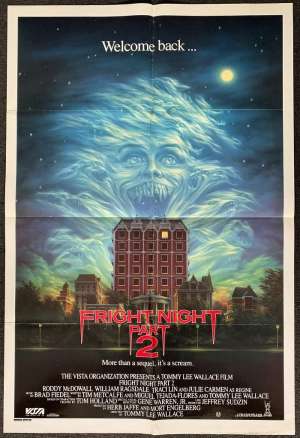 Rare Australian One Sheet Poster.Fright Night Part 2 is a 1988 American horror film directed by Tommy Lee Wallace and starring William Ragsdale, Roddy McDowall, Traci Lind, and Julie Carmen (was nominated for a Saturn Award for her performance). It is the sequel to the 1985 film Fright Night, with Ragsdale and McDowall reprising their roles. Composer Brad Fiedel also returned with another distinct synthesizer score. Following the plot of the first film, it focuses on Charley Brewster who, now a college student, encounters a group of vampires led by a beautiful woman who is seeking him out. Released by New Century/Vista in North America and TriStar Pictures elsewhere in 1989, the film grossed almost $3 million domestically, and has since become a cult film like its predecessor.