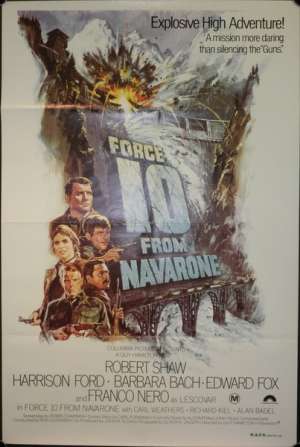 One Sheet Poster artwork by Bryan Bysouth. Force 10 from Navarone is a 1978 British-American war film loosely based on Alistair MacLean's 1968 novel of the same name. It is a sequel to the 1961 film The Guns of Navarone. The parts of Mallory and Miller are played by Robert Shaw (who died before the film was released) and Edward Fox, succeeding the roles originally portrayed by Gregory Peck and David Niven. It was directed by Guy Hamilton and also stars Harrison Ford, Carl Weathers, Barbara Bach, Franco Nero, and Richard Kiel. The film gets its title from the Alistair MacLean book of the same name. Initially there had been plans to produce the film shortly after the 1961 original with Gregory Peck and David Niven reprising their roles. In April 1967 producer Carl Foreman announced he would make ‘After Navarone’ with Anthony Quinn, Gregory Peck and David Niven reprising their roles and J Lee Thompson returning as director. The film would be made by Columbia. In May 1967 it was announced the film would be called ‘The High Dam’ and filming would take place in 1969.This never occurred. It was Ford's first movie after the release of Star Wars. He says he picked the part because it was a "strong supporting character" that was "very different from Han Solo. I wanted to avoid being stereotyped as a science fiction type.