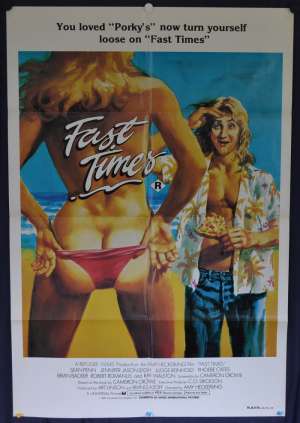 One Sheet Poster.Fast Times or as it was released in the USA as 'Fast Times at Ridgemont High' is a 1982 American teen coming-of-age comedy film directed by Amy Heckerling (her directorial debut) and written by Cameron Crowe, adapted from his 1981 book of the same title. Crowe went undercover at Clairemont High School in San Diego and wrote about his experiences. The film chronicles a school year in the lives of sophomores Stacy Hamilton (Jennifer Jason Leigh) and Mark Ratner (Brian Backer), and their respective older friends Linda Barrett (Phoebe Cates) and Mike Damone (Robert Romanus).The ensemble cast of characters include Sean Penn, Ray Walston, Judge Reinhold and Amanda Wyss. Early appearances by several actors who later became stars, include Nicolas Cage, Forest Whitaker, Eric Stoltz, and Anthony Edwards. Among these actors, Penn, Cage, and Whitaker would later win the Academy Award for Best Actor, with Penn winning twice. Other minor appearances include: Martin Brest, who would soon direct the mega-hit Beverly Hills Cop, Pamela Springsteen, sister of Bruce; Lana Clarkson, the future murder victim of Phil Spector, Crowe's future wife Nancy Wilson of the band Heart. Over the years the film has obtained an iconic cult status. In an interview, Penn stated: "None of us had any idea it would take on a life of its own.