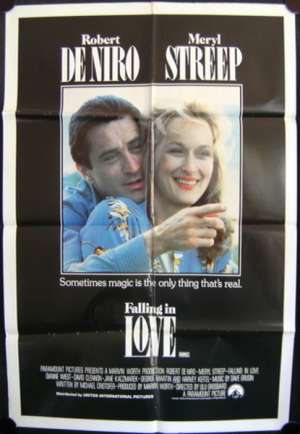 Falling In Love is a shining example of the magic that's created when two of Hollywood's biggest and brightest stars join forces in one special film. Multiple Academy Award winners Robert De Niro and Meryl Streep are together again for the first time since The Deer Hunter. In Falling In Love they play Frank Raftis and Molly Gilmore, two everyday people who meet first by chance, and later by choice. There's just one thing standing between Frank and Molly's intense, newfound love - both are already married. It's a genuine modern dilemma, and De Niro, Streep, and a fine supporting cast bring the story to life with flair and sensitivity.