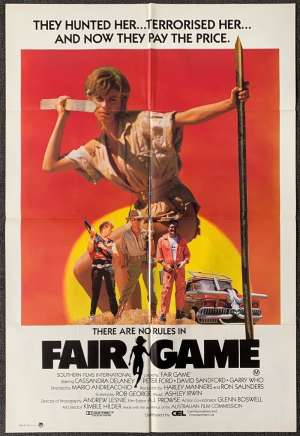 Rare Country Of Origin original One Sheet Poster.Fair Game is a 1986 Australian action thriller film directed by Mario Andreacchio from a screenplay by Rob George. The movie was shot in South Australia with the assistance of the Australian Film Commission. Lead actress Cassandra Delaney appeared alone for the first half of the film. She also spent about three months preparing for the picture and her central character role of Jessica. This included a three-month program of physical exercise including jogging and gym workouts. Stunt Coordinator Glenn Boswell also trained Delaney in horse-riding and trick-car driving. Supporting Actor David Sandford was cast in the movie in the role of Ringo after the producers had seen him in the Kennedy-Miller television mini-series 'The Cowra Breakout' (1984). Director Quentin Tarantino raves about this movie on Mark Hartley's Australian Ozploitation documentary 'Not Quite Hollywood: The Wild, Untold Story of Ozploitation!' (2008) and has labelled this movie as "an absolute classic". When it was released on Video in the UK in 1987, Embassy Home Entertainment had 57 seconds of BBFC cuts to remove shots of Cassandra Delaney having her clothes cut and shots of her breasts when she is tied to the car. Even with the cuts the movie was still classified by the BBFC with an 18+ certificate.The film has become a cult film in some parts of the world.