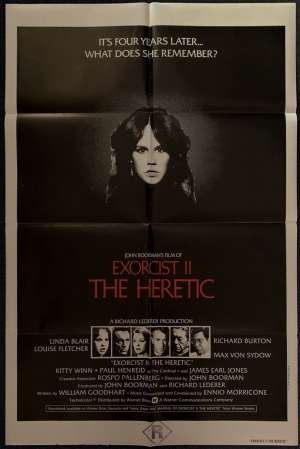 USA One Sheet Poster.Exorcist II:The Heretic is a 1977 American science fiction horror film directed by John Boorman (Deliverance) and starring both Linda Blair and Max Von Sydow who reprised their roles from the first film. An all-star cast was then added - Louise Fletcher (who had just won an Academy Award for One Flew Over The Cuckoo’s Nest) Richard Burton, James Earl Jones and Paul Henried who would make this his last film ever. The film is set four years after the original film and centres on the now 16-year-old Regan MacNeil (Blair) who is still recovering from her previous demonic possession. The Heretic was Warner's largest day and date launch, opening in 725 theatres in the United States and Canada and set an opening weekend record for Warner's with $6.7 million.