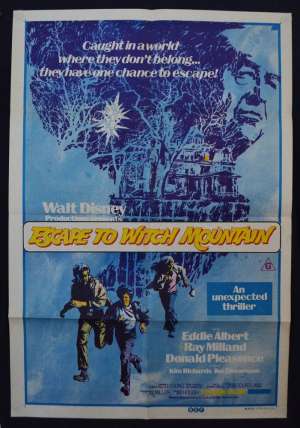 One Sheet Poster.Escape to Witch Mountain is a 1975 American fantasy-children's film, adapted from the 1968 science fiction novel of the same name written by Alexander H. Key. The film was produced by Walt Disney Productions, released in March 1975 by Buena Vista Distribution Company and directed by John Hough. Escape to Witch Mountain is the first film in the Witch Mountain franchise. The film was shot along the Pacific coast in California. It starred Eddie Albert, Ray Milland and Donald Pleasence. The film earned a Total Lifetime Gross at the Domestic North American Box Office of $20,000,000. Critics said it was positive, calling it "a scifi thriller that's fun, that's cheerfully implausible, that's scary but not too scary, and it works."