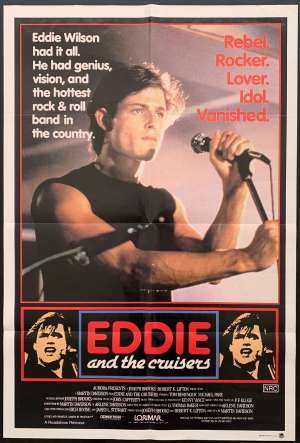 Rarely seen Australian One Sheet Poster art. Eddie and the Cruisers is a 1983 American musical drama film directed by Martin Davidson (The Lords Of Flatbush) based on the novel by P. F. Kluge. Starring in the film was Michael Pare (The Philadelphia Experiment), Tom Berenger (Platoon), Ellen Barkin (Sea Of Love) and Joe Pantoliano (The Goonies). The storyline is as follows: A television reporter investigates the mysterious disappearance of cult rock star Eddie Wilson. Flashbacks dramatize Eddie's life and the rise and fall of his rock and roll band, ‘Eddie and the Cruisers’. Michael Paré was discovered in a New York City restaurant working as a chef. He said of his role in the film that it was "a thrill I've never experienced. It's a really weird high. For a few moments, you feel like a king, a god. It's scary, a dangerous feeling. If you take it too seriously." Critics praised Pare’s performance with one saying: "Mr. Paré makes a fine debut; he captures the manner of a hot-blooded young rocker with great conviction, and his lip-synching is almost perfect. Nine months after the film was released in theatres, the main song in the film, "On the Dark Side", was the number one song in the country on Billboard's Mainstream, Rock, and Heat seeker charts and #7 on the Billboard Hot 100 chart. Another single from the film, "Tender Years," peaked at #31 on the Billboard Hot 100. The film today has a massive cult following.