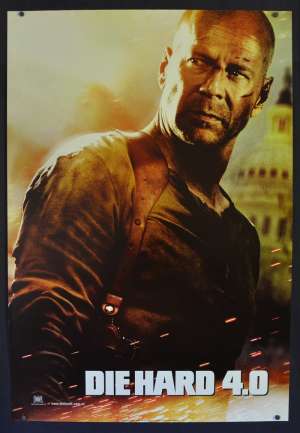 One Sheet Poster.Die Hard 4 Live Free or Die Hard (also known as Die Hard 4 and released as Die Hard 4.0 outside North America) is a 2007 action film, and the fourth installment in the Die Hard film series. The film was directed by Len Wiseman and the film's name was adapted from New Hampshire's state motto, "Live Free or Die". The film was based on the 1997 article "A Farewell to Arms" written for Wired magazine by John Carlin. The project was initially stalled due to the 9/11 terrorist attacks, and when production eventually began, the film's title was changed several times. A variety of visual effects were used for action sequences, even though Wiseman and Willis stated that they wanted to limit the amount of CGI in the film. In separate incidents during filming, both Willis and his stunt double were injured.