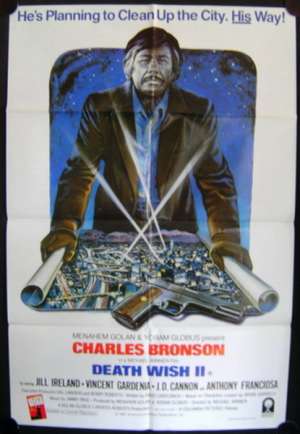 One Sheet Poster.Death Wish 2 was produced by Cannon Films, which had purchased the rights to the Death Wish concept from Dino De Laurentiis. Cannon executive Menahem Golan planned to direct the film, but Winner returned on Bronson's insistence. The soundtrack was composed by guitarist Jimmy Page from Led Zepplin. Death Wish II was released in the United States in February 1982 by Filmways Pictures but like the original, Columbia Pictures handled the international release and Paramount Pictures via Trifecta Entertainment & Media handles the television rights. It earned $16.1 million during its domestic theatrical run.