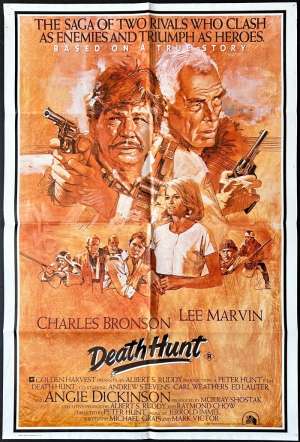 Australian One Sheet Poster with John Solie art.Death Hunt is a 1981 Western action film directed by Peter R. Hunt. The film stars Charles Bronson, Lee Marvin, Angie Dickinson, Carl Weathers, Maury Chaykin, Ed Lauter and Andrew Stevens. Joan Collins was originally cast in the female lead but she does not appear in the final film. Angie Dickinson accepted what was a relatively small role because she wanted to work with Bronson and Marvin. Death Hunt was a fictionalized account of the Royal Canadian Mounted Police (RCMP) pursuit of a man named Albert Johnson. The film was originally known as Arctic Rampage. Bronson and Marvin had first worked together on You're in the Navy Now (1951). Marvin later said "Sometimes during 'Death Hunt,' I'd look over at him [Bronson], and think, 'Well, here we are, still at it, and we've held up well.' The film was financed by Raymond Chow of Hong Kong's Golden Harvest. It was part of a 6 x film slate worth $60 million he announced in July 1979, others including High Road to China, The Cannonball Run, and Battle Creek Brawl, plus two films that were not made, The Texans directed by Sam Peckinpah from a script by John Milius, and Horizons based on a novel by Hardy Kruger.