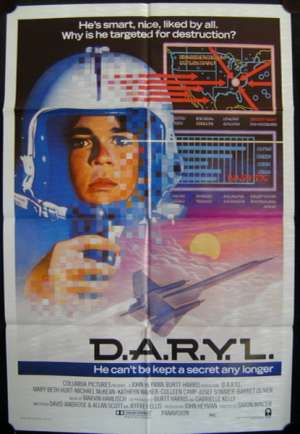 One Sheet Poster with art by Dave Jarvis. D.A.R.Y.L. is a 1985 science fiction film written by David Ambrose, Allan Scott and Jeffrey Ellis. The storyline involves a seemingly normal young boy who turns out to be a top secret, military-created robot with superhuman abilities. The film was directed by Simon Wincer (The Lighthorsemen) and stars Barret Oliver, Mary Beth Hurt, Michael McKean, Danny Corkill, and Josef Sommer. Filming took place from January to March in 1985. Locations included at Pinewood Studios; Orlando, Florida; and Dillsboro, North Carolina. D.A.R.Y.L was released in the United States on June 14, 1985 and released in the Singapore on May 5, 1986. The original music score was composed by Marvin Hamlisch. Film critic Roger Ebert recommended the movie praising its ending and comparing its theme to that of the 1968 film Charly.