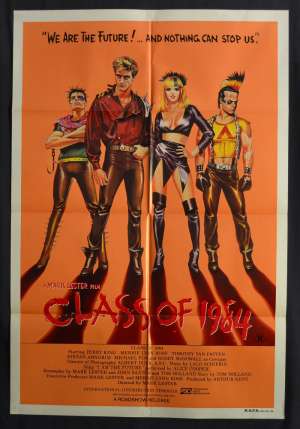 Rare Original Australian One Sheet movie poster. Class of 1984 is a 1982 Canadian action crime thriller film directed by Mark Lester and co-written by Tom Holland and John Saxton based on a story by Holland. The film stars Perry King, Merrie Lynn Ross, Timothy Van Patten, Stefan Arngrim, Michael J. Fox (credited as Michael Fox in an early role prior to his breakthrough role in Back to the Future), and Roddy McDowall.The film utilized the punk look and image that was becoming part of popular culture in the early 1980s. The theme song, "I Am the Future", was performed by Alice Cooper. The film also features a performance by Canadian punk band Teenage Head.