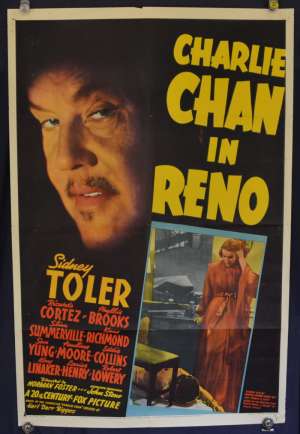 One Sheet Poster.Charlie Chan In Reno is a 1939 American film directed by Norman Foster, starring Sidney Toler as the fictional Chinese-American detective Charlie Chan, based on an original story "Death Makes a Decree" by Philip Wylie. Also starring Victor Sen Yung as Jimmy Chan Ricardo Cortez as Dr. Ainsley Phyllis Brooks as Vivian Wells and Slim Summerville as Sheriff Tombstone Fletcher. The storyline of the film concerns Mary Whitman who has arrived in Reno to obtain a divorce. While there, she is arrested on suspicion of murdering a fellow guest at her hotel (which specializes in divorcers).There are many others at the hotel who wanted the victim out of the way. Charlie Chan travels from his home in Honolulu to Reno to solve the murder at the request of Mary's soon-to-be ex-husband.