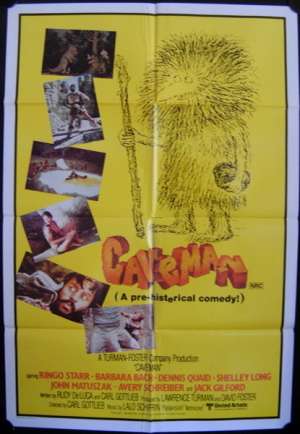 Caveman is a 1981 American slapstick comedy film written and directed by Carl Gottlieb and starring Ringo Starr, Dennis Quaid, Shelley Long and Barbara Bach. The film features stop-motion animated dinosaurs constructed by Jim Danforth, including a Tyrannosaurus Rex which in one scene becomes intoxicated by a cannabis-type drug, animated by Randall W. Cook. The film's dialog is almost entirely in "caveman" language. At some showings audiences were issued a translation pamphlet for 30 "caveman words. Barbara Bach and Ringo Starr first met on the set of Caveman, and they married just over a year later. Janet Maslin of The New York Times wrote that the film was "dopey, but it's also lots of fun". The film has over the years developed a cult following.