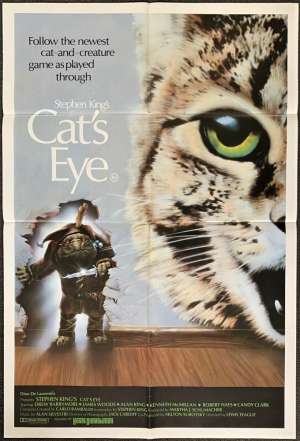 Original One sheet movie poster.Cat's Eye (also known as Stephen King's Cat's Eye) is a 1985 American anthology horror film directed by Lewis Teague and written by Stephen King. It comprises three stories, "Quitters, Inc.", "The Ledge", and "General". The first two are adaptations of short stories in King's Night Shift collection, and the third is unique to the film. The three stories are connected only by the presence of a traveling cat, which plays an incidental role in the first two and is a major character of the third.Its cast includes Drew Barrymore, James Woods, Alan King, Robert Hays and Candy Clark. Cat's Eye received positive reviews from critics and grossed $13,086,298 at the domestic box office. The film was nominated for the International Fantasy Film Award for Best Film in 1987. Drew Barrymore was nominated for the Young Artist Award for Best Starring Performance by a Young Actress in a Motion Picture in 1986.