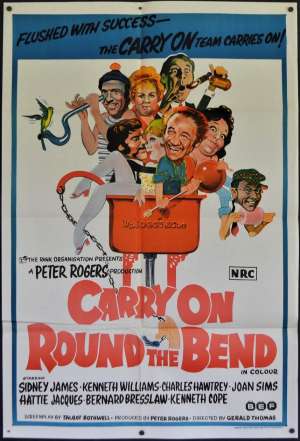 Carry On Round The Bend Poster Original One Sheet Rare

One Sheet Poster.Carry On Round The Bend released in 1971, is the 22nd in the series of Carry On films to be made, and was the first box office failure of the series. This failure has been attributed to the film's attempt at exploring the political themes of the trade union movement, crucially portraying the union activists as idle, pedantic buffoons which, apparently, alienated the traditional working-class audience of the series. The film, known as Carry On At Your Convenience within the United Kingdom, did not return full production costs until 1976 after several international and television sales.The film features regulars Sid James, Kenneth Williams, Charles Hawtrey, Joan Sims, Hattie Jacques and Bernard Bresslaw. It features Kenneth Cope in the first of his two Carry on appearances. It is interesting to note that after Sid James's character was criticised for leering at some girls in Carry On Henry (1971), here his character was changed to the put-upon family man similar to the character he portrayed in the TV sitcom Bless This House.