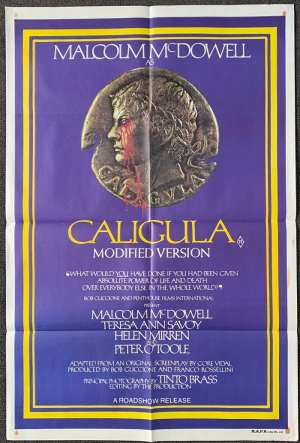 One Sheet Poster.Caligula (Italian: Caligola) is a 1979 Italian-American erotic historical drama film focusing on the rise and fall of the Roman Emperor Caligula. It stars Malcolm McDowell, Teresa Ann Savoy, Helen Mirren, Peter O'Toole, John Steiner and John Gielgud. It is the only feature film produced by the men's magazine Penthouse. Producer Bob Guccione, the magazine's founder, intended to produce an explicit pornographic film with a feature film narrative and high production values. He intended to cast Penthouse Pets as extras in un-simulated sex scenes filmed during post-production by Guccione and Giancarlo Lui. The film's release was controversial; it was met with legal issues and controversies over its violent and sexual content. Although reviews were overwhelmingly negative (though McDowell's performance as the title character was praised), Caligula is considered to be a cult classic and its political content was considered to have significant merit.