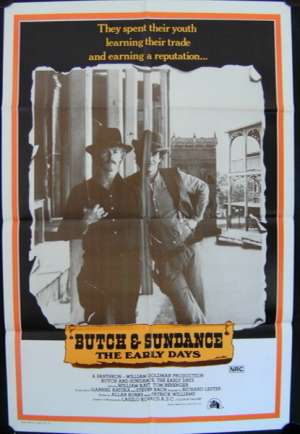 Butch And Sundance The Early Days Poster Original One Sheet 1979

One Sheet Poster.Butch and Sundance: The Early Days is a 1979 Western film and prequel to the 1969 film Butch Cassidy and the Sundance Kid. It stars Tom Berenger (Platoon) as Butch Cassidy and William Katt (Big Wednesday) as the Sundance Kid, with Jeff Corey reprising his role as Sheriff Bledsoe. Also starring were a list of impressive stars that would go onto bigger movies later. These included Peter Weller (Robocop) Christopher Lloyd (Back To The Future movies) and Brian Dennehy (First Blood).It was directed by Richard Lester (Superman Movies) and written by Allan Burns. It was nominated for an Oscar for Best Costume Design.