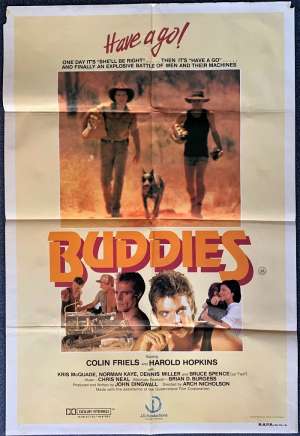 Exceptionally rare One Sheet poster. Buddies is a 1983 Australian comedy/drama film starring Colin Friels, Bruce Spence, Harold Hopkins and Kris McQuade. Young miners Mike (Colin Friels) and Johnny (Harold Hopkins) work in the gem fields of central Queensland around Emerald. Conflict arises when their pick-and-shovel operation is threatened by a large-scale bulldozer operator. It was directed by Arch Nicholson and written and produced by John Dingwall. Dingwall raised the money to produce the film with the help of Rex Pilbeam, a former mayor of Rockhampton. Most of the money was raised in Queensland, including investment from the Queensland Film Corporation. Shooting took place on location in Emerald, Queensland and lasted for six weeks. The film was not a great success in 1983, as no Australian distributor wanted to release it, but Dingwall took it around the country cinemas himself, where it was well received. The posters for the film are rarely seen due to the film not enjoying a major studio release. Despite the limited commercial release, at the 1983 AFI awards Buddies was nominated in the Best Achievement in Sound, Best Actor in a Supporting Role (Simon Chilvers), Best Actress in a Lead Role (Kris McQuade) and Best Original Music Score (Chris Neal) categories. John Dingwall won the Best Original Screenplay AFI Award for the script.