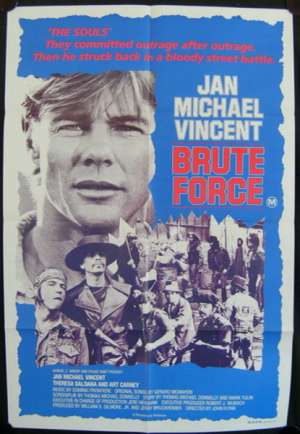 One Sheet Poster.Brute Force (or Defiance as it is known in the USA) is a 1980 American film starring Jan-Michael Vincent, Art Carney, and Theresa Saldana. The film, an early Jerry Bruckheimer production, follows a suspended young seaman (Jan-Michael Vincent) who takes up temporary housing in a neighbourhood overrun by a gang while waiting for his next orders to ship out. The gang is in dominating control, stealing and robbing at will. No one will press charges due to fear of retribution, so he takes matters into his own hands to combat the growing violence, spurring his fellow neighbours to join him. The film has screened often on cable movie channels.