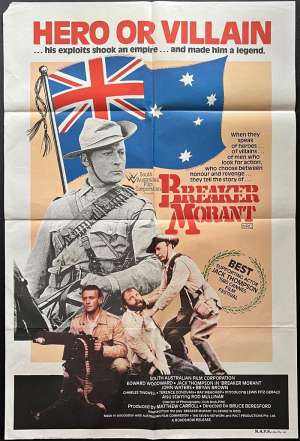 One Sheet Poster - Country Of Origin. Breaker Morant is a 1980 Australian war- and trial film directed by Bruce Beresford, who also co-wrote the screenplay which was based on Kenneth G. Ross' 1978 play of the same name. It starred, Edward Woodward, Bryan Brown, Jack Thompson, Lewis Fitz-Gerald and John Waters.In 1980, the film won ten Australian Film Institute Awards including: Best Film, Best Direction, Leading Actor, Supporting Actor, Screenplay, Art Direction, Cinematography, and Editing. It was also nominated for the 1980 Academy Award for the Best Writing (Screenplay Based on Material from Another Medium). Breaker Morant remains the movie with which Beresford is most identified and has "hoisted the images of the accused officers to the level of Australian icons and martyrs." Breaker Morant heavily influenced Australian New Wave war films such as Gallipoli (1981), The Lighthorsemen (1987), and the five-part TV series ANZACS (1985).