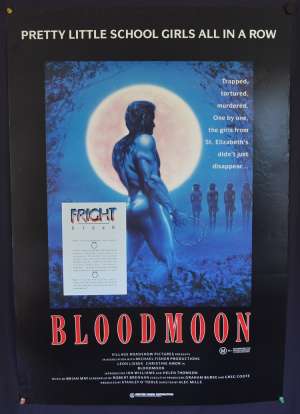 Original Australian One sheet movie poster .Bloodmoon is a 1990 Australian slasher film directed by Alec Mills. It was featured in the famous documentary Not Quite Hollywood: The Wild, Untold Story of Ozploitation!. The film was released with a "fright break" towards the end where the audience had a chance to walk out and claim a refund if they were not coping. People are getting murdered down under via a barbed wire noose and then their eyes are gouged out. There are a variety of suspects at a nearby girls boarding school including students, teachers, and a nun. We also follow a rivalry between the local surfer townies and a group of preppy guys from a local all-boys school.