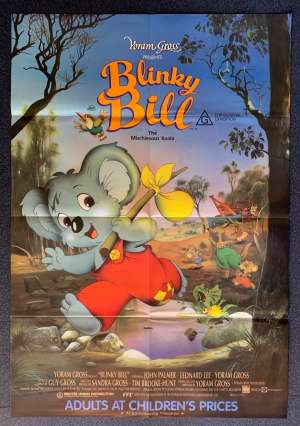 Country Of Origin One Sheet Poster. Blinky Bill: The Mischievous Koala is a 1992 Australian animated adventure comedy film directed by Yoram Gross and distributed by his Sydney-based production company Yoram Gross Film Studio. The film tells the story of Blinky Bill’s childhood with his animal friends in the Australian bush. The peace and charm of their existence is shattered by the destruction of their homes by humans. Blinky Bill rallies his friends, in a series of exciting adventures, as they battle to protect their homes from destruction and as he rescues his mother from captivity. The animation is superimposed over live-action footage of the Australian bush. Filming was on location in a farm at Bobin. Guy Gross (Priscilla Queen of The Desert fame) composed and produced the music and songs. Blinky Bill: The Mischievous Koala grossed $1,903,659 at the box office in Australia. Due to the film’s success a 26-episode television series, The Adventures of Blinky Bill was aired on the Australian Broadcasting Corporation and Seven Network for three seasons. A contemporary CGI film titled Blinky Bill the Movie was released in 2015, featuring the voices of Ryan Kwanten, Toni Collette, Barry Humphries, Deborah Mailman, Robin McLeavy, Richard Roxburgh, Rufus Sewell, David Wenham and Barry Otto.