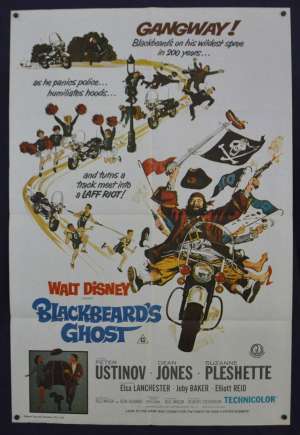 One Sheet Poster.Blackbeard's Ghost is a 1968 American fantasy comedy film directed by Robert Stevenson and starring Peter Ustinov, Dean Jones and Suzanne Pleshette. It was produced by Walt Disney Productions and Bill Walsh. It is based upon the 1965 novel of the same name by Ben Stahl and was shot at the Walt Disney Studios. Peter Ustinov later voiced the villainous Prince John, a lion in the 1973 Disney animated feature film, Robin Hood. Blackbeard's Ghost received positive reviews from critics and audiences. At the box office it earned $21,540,050.