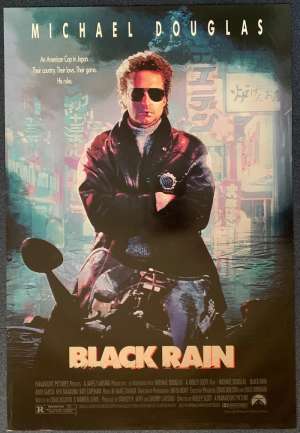 One Sheet Poster.Black Rain is a 1989 American action thriller film directed by Ridley Scott and written by Craig Bolotin and Warren Lewis. It stars Michael Douglas, Andy García, Ken Takakura, Kate Capshaw, and features Yūsaku Matsuda (in his final film role before his death that year) and Shigeru Kōyama. The film focuses on two NYPD officers who arrest a member of the Yakuza and must escort him back to Japan. Once there, he escapes, and the two officers find themselves dragged deeper and deeper into the Japanese underworld. Black Rain was released by Paramount Pictures on September 22, 1989. Upon release, the film received generally positive reviews from critics. They praised the performances, action sequences, Hans Zimmer's musical score, direction and editing. The film has gone on to become a major cult film and is widely praised. Commercially Black Rain was a huge box office hit, grossing over $134 million worldwide in front of a production budget of $30 million, and was nominated for two Academy Awards; Best Sound and Best Sound Editing.