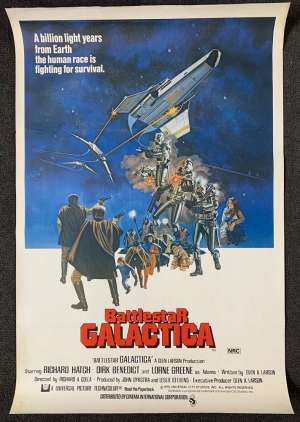 Australian One Sheet Poster originally issued folded but has been stored rolled and will be sent that way. It has stunning artwork by Robert Tanenbaum. Battlestar Galactica is an American science fiction television series created by Glen A. Larson that began the Battlestar Galactica franchise. Starring Lorne Greene, Richard Hatch, and Dirk Benedict, it follows the surviving humans as they flee in Battlestar Galactica and other ships in search for a new home while being pursued by the Cylons. The pilot to this series, budgeted at $8 million (one of the most expensive at that time), was released theatrically (in Sensurround) in various countries including Australia, Canada, Japan and some in Western Europe in an edited 125-minute version. Thus theatrical posters were released such as the one offered here. The series has gained a huge cult following since.