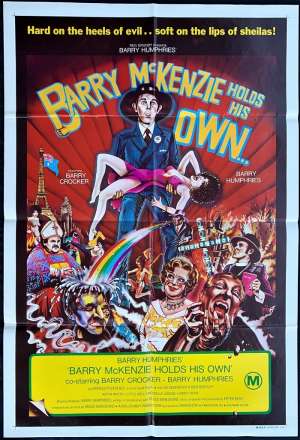 Barry McKenzie Holds His Own Poster Original One Sheet 1974

One Sheet Poster art by Peter & Steve.Barry McKenzie Holds His Own is the 1974 sequel to the 1972 Australian comedy film The Adventures of Barry McKenzie. Returning from the original film is Barry Crocker in the title role, as well as Barry Humphries in the role of Barry's aunt, Edna. Also returning in the director's chair is Bruce Beresford. The then Prime Minister of Australia, Gough Whitlam, along with his wife Margaret Whitlam, made cameo appearances as themselves. The movie was entirely funded by Reg Grundy. Shooting began in February 1974. Most of the film was shot on location in England, Wales and Paris, with some studio scenes shot in London. Edna's home movie footage was shot at Palm Beach, Sydney, in December 1973. British unions constantly objected to Australian cast and crew working in Britain. Barry McKenzie Holds His Own grossed $1,407,000 (which is equivalent to $9,497,250 in 2009 dollars) at the box office in Australia on a budget of 450,000. Barry Humphries contends that Barry McKenzie was an inspiration for the later film Crocodile Dundee. The film has gone onto be an Australian classic.