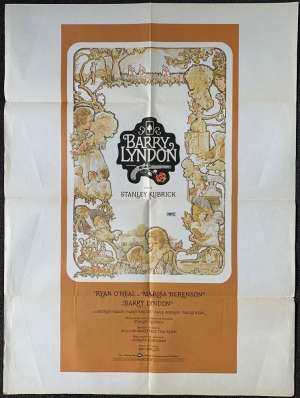 Barry Lyndon is a 1975 British-American period drama film by Stanley Kubrick, based on the 1844 novel The Luck of Barry Lyndon by William Makepeace Thackeray. It stars Ryan O'Neal, Marisa Berenson, Patrick Magee, Leonard Rossiter and Hardy Krüger. The film recounts the early exploits and later unraveling of a fictional 18th-century Irish rogue and opportunist who marries a rich widow to climb the social ladder and assume her late husband's aristocratic position. The wry and doleful unreliable narrator Michael Hordern occasionally voice-overs the story. The film's cinematography has been described as ground-breaking. Especially notable are the long double shots, usually ended with a slow backwards zoom, the scenes shot entirely in candlelight, and the settings based on William Hogarth paintings. The exteriors were filmed on location in Ireland, England and Germany, with the interiors filmed mainly in Kubrick's adopted home city of London. Barry Lyndon won four Oscars in production categories at the 1975 Academy Awards. Like many of Kubrick’s works it is now regarded as one of his greatest achievements, and one of the finest films ever made. Stylish poster art by Charles Gehm.