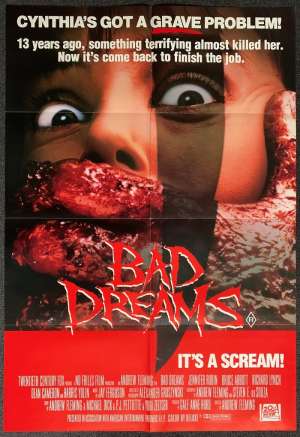 Original Rare Australian One Sheet Poster.Bad Dreams is a 1988 American horror film co-written and directed by Andrew Fleming and starring Jennifer Rubin, Bruce Abbott, E.G. Daily, Harris Yulin and Richard Lynch. It was produced by Gale Anne Hurd. The plot follows a young woman who awakens from a thirteen-year-long coma and finds herself being stalked by the ghost of a cult leader who led a mass suicide by fire that she survived as a young girl. Bad Dreams was shot on location in Los Angeles, California over a period of eight weeks, with production beginning on October 26, 1987, and concluding in mid-December. Shooting locations included the California Medical Centre and California Medical Building in Los Angeles; Lakeview Hospital in Lake View Terrace; and the Brentwood Veterans Hospital. Vincent Canby of The New York Times called it a "a breezy, bloody kind of amalgam of The Breakfast Club and A Nightmare on Elm Street. He went on to say ‘for a film of this genre, it has a cast of unusually good actors.’