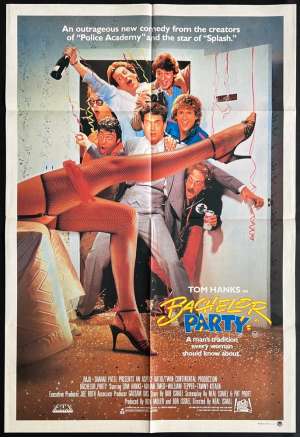 Australian One Sheet Poster.Bachelor Party is a 1984 American comedy film directed by Neal Israel, written by Israel and Pat Proft, and starring Tom Hanks, Adrian Zmed, William Tepper and Tawny Kitaen. The film was made in the wake of the success of Police Academy. The film chronicles a bachelor party being thrown by a group of friends for their friend Rick Gassko (Hanks) on the eve of his wedding and whether or not he can resist the temptation of being unfaithful to his fiancée Debbie (Kitaen). The origins of the film came from an actual bachelor party thrown by producer Ron Moler and a group of friends for fellow producer Bob Israel. In fact, several members of the cast and crew involved with the production of the movie were at that party when the idea began to take shape. This film is considered to be the one that launched Tom Hank’s career.