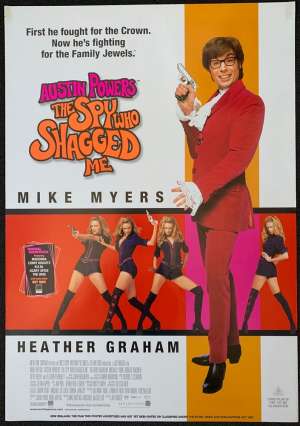 Austin Powers The Spy Who Shagged Me Poster One Sheet 1999

One Sheet Poster.Austin Powers: The Spy Who Shagged Me is a 1999 American spy comedy film directed by Jay Roach. It is the second instalment in the Austin Powers film series, after International Man of Mystery. It stars franchise co-producer and writer Mike Myers as Austin Powers, Dr. Evil and Fat Bastard. The film also stars Heather Graham, Michael York, Robert Wagner, Seth Green, Elizabeth Hurley, will Ferrell and Tim Robbins. The film's title is a play on the James Bond film The Spy Who Loved Me (1977).The film grossed around $312 million in worldwide ticket sales, taking more money during its opening weekend than the entire box office proceeds of its predecessor. It was nominated at the 72nd Academy Awards for Best Makeup (Michèle Burke and Mike Smithson).