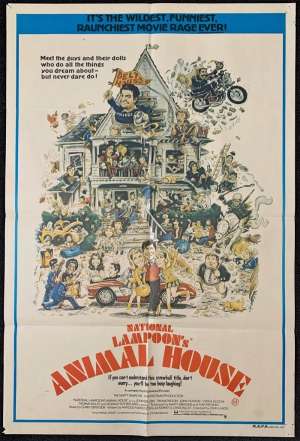 First Release Australian One Sheet Poster with Rick Meyerowitz art.National Lampoon's Animal House is a 1978 American comedy film produced by Ivan Reitman and Matty Simmons, directed by John Landis, and starring John Belushi, Tim Matheson, John Vernon, Verna Bloom, Thomas Hulce, and Donald Sutherland. The screenplay was adapted by Douglas Kenney, Chris Miller, and Harold Ramis from stories written by Miller and published in National Lampoon magazine. The stories were based on Ramis's experience in the Zeta Beta Tau fraternity at Washington University in St. Louis, as well as Miller's experience in the Alpha Delta Phi fraternity at Dartmouth College, and producer Ivan Reitman's experiences at Delta Upsilon at McMaster University in Hamilton, Ontario. Of the younger lead actors, only John Belushi was an established star, but even he had not yet appeared in a film, having gained fame mainly from his Saturday Night Live television appearances. Several of the actors who were cast as college students, including Karen Allen, Tom Hulce, and Kevin Bacon, were just beginning their film careers, although Tim Matheson had recently appeared as one of the vigilante motorcycle cops in the second Dirty Harry film, Magnum Force.