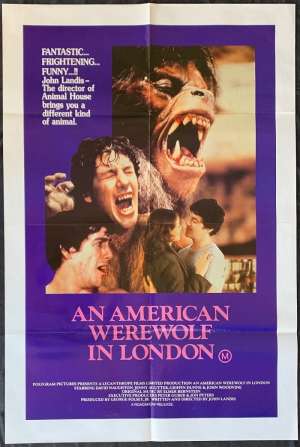 An American Werewolf In London Poster Original One Sheet 1981

One Sheet Poster.An American Werewolf in London is a 1981 horror comedy film written and directed by John Landis and starring David Naughton, Jenny Agutter and Griffin Dunne. Filming took place in London, Surrey and Wales. Released in the United States on August 21, 1981, it received positive reviews regarding Rick Baker's make-up special effects, and grossed $30.56 million at the box office. From Baker's effects, the film won the 1981 Saturn Award for Best Horror Film and the inaugural Academy Award for Best Makeup. The film was one of three high-profile wolf-themed horror films released in 1981, alongside The Howling and Wolfen. Since its release, it has become a cult classic and this poster art is considered to be the best around.