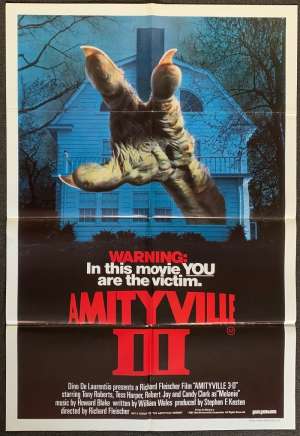 Original One Sheet Poster.Amityville 3-D (also known as Amityville III: The Demon) is a 1983 American horror thriller film and the third installment in the Amityville series. It was one of a spate of 3-D films released in the early 1980s. The film was directed by Richard Fleischer and the script was written by David Ambrose (under the pseudonym William Wales). It was the only Orion Pictures film filmed in 3-D. Due to a lawsuit between the Lutz family and Dino De Laurentiis over the storyline which did not involve the Lutz family, Amityville 3-D was not called a sequel.However the film does make reference to the original Amityville Horror story. The character of John Baxter is loosely based on Stephen Kaplan who at the time was trying to prove the Lutzes' story was a hoax. The name Lutz is never used in the film. The DeFeo family is referenced more than once, despite the fact that the name had been changed to Montelli in the previous entry in the series Amityville II: The Possession.