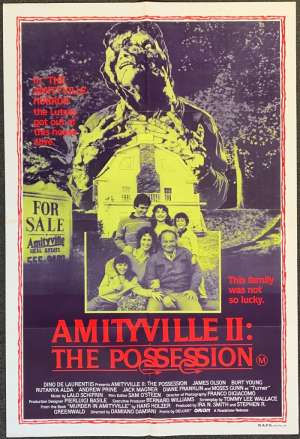 Original Australian One Sheet Poster with highly collectible art.Amityville II: The Possession is a 1982 Mexican-American supernatural horror film directed by Damiano Damiani. The screenplay by Tommy Lee Wallace is based on the novel Murder in Amityville by the parapsychologist Hans Holzer. It is a prequel to The Amityville Horror, set at 112 Ocean Avenue and featuring the fictional Montelli family loosely based on the DeFeo family. The cast includes Academy Award nominee Burt Young, who was known for Rocky at the time. This film includes one of Young's rare darker roles as he plays an abusive and sadistic father/husband in contrast to his more easy going roles. Amityville II set the pattern for low-budget sequels with little reference to real-life events in Amityville and is the only film in the series besides the original that features music composed by Lalo Schifrin. Roger Ebert of the Chicago Sun-Times, who gave the first film a negative review, claimed the film "is actually slightly better than The Amityville Horror" and mentioned some good technical credits and performances and gave the film 2 out of 4 stars.