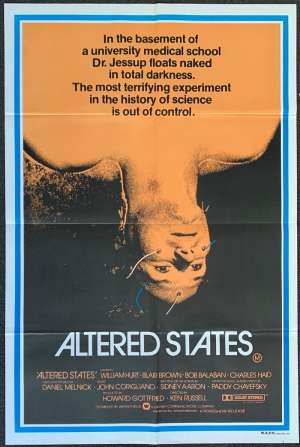 Australian One Sheet Poster.Altered States is a 1980 American science fiction-horror film adaptation of a novel by the same name by playwright and screenwriter Paddy Chayefsky. Altered States was Chayefsky's only novel and his final screenplay. Both the novel and the film are based on John C. Lilly's sensory deprivation research conducted in isolation tanks under the influence of psychoactive drugs like mescaline, ketamine and LSD. The film was directed by Ken Russell and was also the film debut of William Hurt and Drew Barrymore. Chayevsky was credited as a screenwriter for the film using the pseudonym Sidney Aaron, his actual first and middle names. The film score was composed by classical composer John Corigliano (with Christopher Keene conducting) and was nominated for an Academy Award. The film also received an Oscar nomination for Sound.