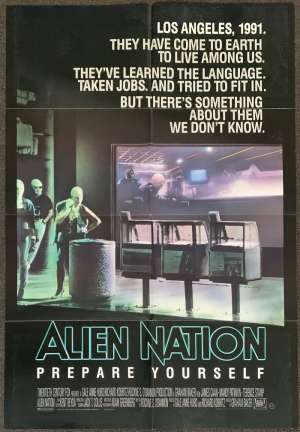 Australian One Sheet Poster.Alien Nation is a 1988 American buddy cop neo-noir science fiction action film directed by Graham Baker. The ensemble cast features James Caan, Mandy Patinkin and Terence Stamp. Its initial popularity inaugurated the beginning of the Alien Nation media franchise. The film depicts the assimilation of the "Newcomers", an alien race settling in Los Angeles, much to the initial dismay of the local population. The plot integrates the neo-noir and buddy cop film genres with a science fiction theme, focusing on a union between a veteran police investigator (Caan) and an extra-terrestrial (Patinkin); the first Newcomer detective. The duo probe a criminal underworld attempting to solve a homicide. Alien Nation was released in the United States on October 7, 1988, and grossed over $32 million worldwide and has since gained a cult following. The motion picture spawned a short-lived television series, five television films, a set of comic books, as well as a number of novels, all in an attempt to continue the character development surrounding the fictional alien culture.