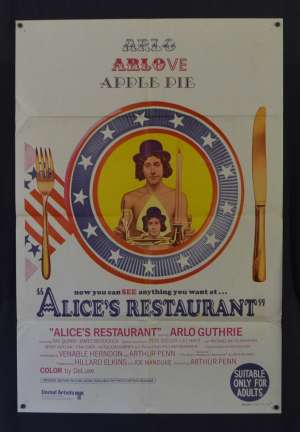 One Sheet Poster.Alice's Restaurant is a 1969 American comedy film directed by Arthur Penn (father of Sean Penn). It is an adaptation of the 1967 folk song "Alice's Restaurant Massacree", originally written and sung by Arlo Guthrie. The film stars Guthrie as himself, with Pat Quinn as Alice Brock (the real Alice Brock makes a number of cameo appearances in the film) and James Broderick as Ray Brock. Penn, who resided in the story's setting of Stockbridge, Massachusetts, co-wrote the story with Venable Herndon in 1967 after hearing the song, shortly after directing Bonnie & Clyde. Many of Guthrie's real-life associates in Stockbridge made appearances as extras. Alice's Restaurant was released on August 19, 1969, a few days after Guthrie appeared at the Woodstock Festival. It went on to be nominated for numerous awards including Best Director at the Academy Awards.