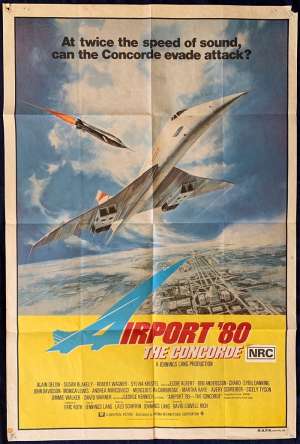 Australian One Sheet Poster.Airport '80: The Concorde as it was released in Australia and the UK a year after its original release in the USA as Airport '79 is a 1979 American air disaster film.The film is the fourth and final installment of the Airport franchise. Produced on a then high budget of $14 million, it earned a little over $13 million thus ending the enormous financial success of the Airport franchise. The film was directed by David Lowell Rich and the ensemble cast includes George Kennedy, who appeared in all four films from the Airport series. Alain Delon and Robert Wagner also star, while Mercedes McCambridge, Martha Raye, Sylvia Kristel, Eddie Albert, Bibi Andersson, Cicely Tyson and Ed Begley, Jr. have cameos.