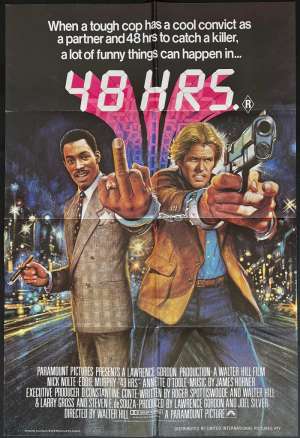 Nick Nolte and Eddie Murphy make one of the most unusual and entertaining teams ever in Walter Hill's roller-coaster thriller, "48 Hours". Nolte is a rough-edged cop after two vicious cop-killers. He can't do it without the help of smooth and dapper Murphy, who is serving time for a half-million dollar robbery. This unlikely partnership trades laughs as often as punches as both pursue their separate goals: Notle wants the villians; Murphy want his money and some much-needed female companionship. Watch for Murphy's hilarious scene in a redneck country & western bar - you'll want to see it again and again.