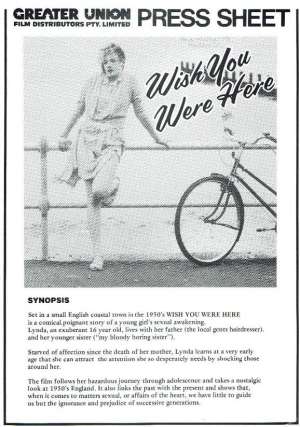 Original Movie Press Sheet.Wish You Were Here is a 1987 British comedy-drama film starring Emily Lloyd and Tom Bell. It was written and directed by David Leland. The film was based loosely on the memoirs of the British madam Cynthia Payne as an adolescent growing up on the Sussex coast.It was filmed in the West Sussex towns of Worthing and Bognor Regis.