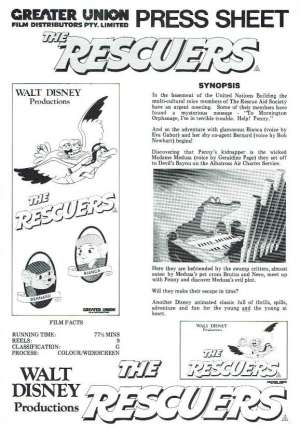 Original Movie Press Sheet.The Rescuers is a 1977 American animated adventure film produced by Walt Disney Productions and first released on June 22, 1977 by Buena Vista Distribution. The 23rd film in the Walt Disney Animated Classics series it featured the voices of Bob Newhart, Eva Gabor, Michelle Stacy and Geraldine Page. The film is based on a series of books by Margery Sharp, most notably The Rescuers and Miss Bianca. Due to the film's success, a sequel entitled The Rescuers Down Under was released in 1990, which made this film the first Disney animated film to have a sequel.