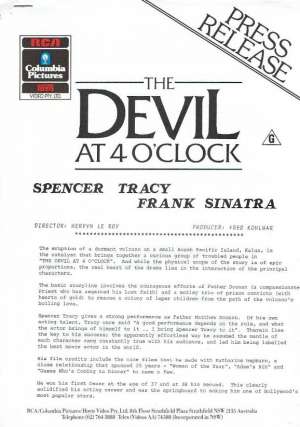 Original Home Video 2 page Press Release.The Devil at 4 O'Clock is a 1961 American Eastman Color disaster film, starring Spencer Tracy and Frank Sinatra and directed by Mervyn LeRoy. Based on a 1959 novel with the same title by British writer Max Catto, the film was a precursor to the disaster films of the 1970s, such as The Poseidon Adventure, Earthquake, and The Towering Inferno.