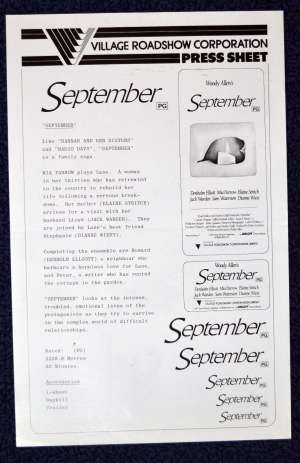 Press Sheet.September is a 1987 film written and directed by Woody Allen. Allen's intention for September was that it be like "a play on film," hence the great number of long takes and few camera effects. The movie does not use Allen as an actor, and is one of his straightforwardly dramatic films. The cast includes Mia Farrow, Sam Waterston, Dianne Wiest, Elaine Stritch, Jack Warden, and Denholm Elliott. The film is modelled on Anton Chekhov's play Uncle Vanya.