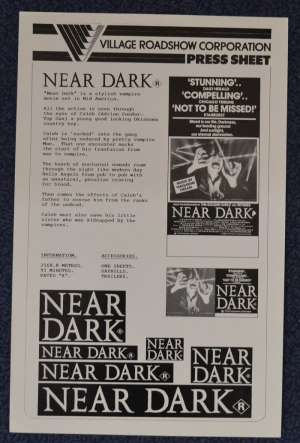 Original Movie Press Sheet. Near Dark is a 1987 American Western horror film directed by Kathryn Bigelow and written by her and Eric Red. The story follows a young man in a small mid-western town who becomes involved with a family of nomadic American vampires. Starring then little-known actors Adrian Pasdar and Jenny Wright, the film was part of a revival of serious vampire movies in the late 1980s.,Critic reviews were positive and over the years, the film has garnered a cult following.